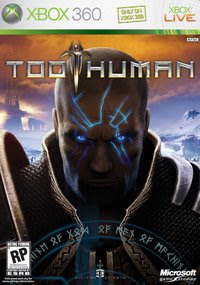 At the weekend I stumbled across an offer for Too Human. After reading a number of negative reviews I still could not pass up on an action RPG for only £9.98. (especially as I was looking for another co-op game to play with my girlfriend’s son).

Not long after loading the game I could already see why people were disappointed in this game. The graphics were okay in some sections but quite poor in others (a bit like Prey I guess), the voice acting wasn’t up to much, the dialogue was pretty poor, and the combat (along with the camera) felt a bit.. broken. For some reason I stuck with it though. I died a few times (witnessing the unskippable death animation), but gradually continued my way through the first level/world.

I think it was about 1 or 2 hours into the game that I actually began to enjoy the game. There was a huge number of different items and armour types (which I loved.. I hate RPGs where all your friends characters look the same), and I was beginning to get the hang of combat.

After enjoying the delights of Fable 2 this game appears rushed and really flawed, but there is something underlying that is quite addictive. something I can’t quite put my finger on. I managed to try my hand at the co-op mode (with my girlfriend’s son) and this is where I have had the most enjoyment so far (the camera in this mode is a big improvement over the Fable 2 online co-op settings).