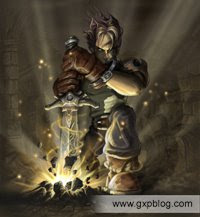 Jonathan Ross (British television presenter for the BBC, amongst other things) accidentally announced work on Fable 3 yesterday via his twitter account.

Wossy: “Goodnight all. Must go to bed. Got asked to do voice in Fable 3 tonight. Subarashi. Oyasuminasia. Woss out.”

Wossy: “@ScottRhodie yes they are doing it. Charlie Brooker said he would do a voice for it to ! Great fun !!”

Wossy: “Good morning. Today i must file DVD’s, write a piece for The Times, apologize to Peter Molyneux then go Thorpe Park for SAW rollercoaster !”

Oilcan: “@Wossy Why do you have to apologise to Molyneux?”

Wossy: “@oilcan because I think I revealed something that was not officially announced yet…”

RossSanty: “@Wossy y u need to apologize to peter molyneux??? Cuz u let slip about fable 3??”

After discussing this on various forums it has come to my/our decision that it is more likely that Jonathan Ross is actually providing voice talent to Fable 2 DLC or an even bigger expansion (much like Shivering Isles in Oblivion – or “The Lost Chapters” of the original Fable game).

Whether this is going to be an expansion or a new Fable 3 game I am very excited. Inevitably there will be a Fable 3 game, but this feels much too early to begin work on a sequel. Whatever the outcome, I cannot wait!