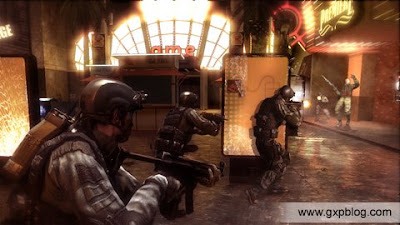 Every now and then I get hit by the sudden urge to play through one (or some) of my older games. This weekend I blew the dust off one of my most favourite titles, Tom Clancy’s Rainbow Six Vegas 2.

For the first time ever I got to enjoy playing this on my (girlfriend’s) HDTV. Some have said that the graphics for this game have aged, but for me it looked gorgeous! I was also really impressed that the game was still incredibly popular online. For me, Vegas 2 (and almost all of the Rainbow Six games I have played since Rogue Spear on the PC) have been one of the most enjoyable gaming experiences. I was so happy to see this old game (well, over a year old) with such an impressive online community. Most titles nearly die after about 6 months, but the number of full servers/matches was staggering.

Another element I have also frequently enjoyed with Rainbow Six games is the attitude of gamers. I’m not sure what attracts them, but nearly everyone is helpful and sporting. People work together and play as a team. In all my matches (of both Vegas 1 and 2) I have never heard anything along the lines of “I’ve pwned you nooberz!”. It’s such a refreshing experience after playing such titles as Gears of War and Call of Duty.

So here I am, back on Rainbow Six Vegas 2 and absolutely loving it! I think I will stay here for a little while yet. If you are yet to try this game I strongly advise you do. It’s a lot more tactical and rewarding than most shooters, and as mentioned previously the community is really positive (although you may still be unfortunate to stumble across pockets of unsporting players, much like in any game). If like me you haven’t played it in a while, now is still a good time to return to it. The game is still thriving online and the gameplay is just as addictive as it has always been.

I look forward to seeing you all online 🙂