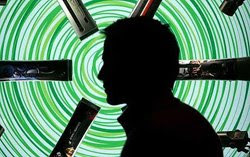 Like most of you I have been following the E3 lately and finding out information on the fantastic lineup of games for the Xbox 360. With all the big media sites out there, I didn’t feel that covering the E3 would offer anything new or unique. Those who want to find out about the new games could easily do so on hundreds of other blogs and websites, so I spent my time reading, twittering, and gaming instead.

Here is a little update of where I’m up to…

The GXP Twitter Page
Somehow the GXP blog twitter page has acquired a total of 50 followers! I’m aware that there are plenty out there with well over 1000, but for me this still feels like quite an achievement. It’s nice to know that there are people out there interested in my blog and gaming opinions. So for all those of you who signed up (marketing spammers included) thank you. 🙂

Xbox 360 Games I’ve Been Playing
Since my last update I have been playing a LOT of Xbox 360 games. Is it an addiction? I’m not too sure. Whatever the reason, I have been having a lot of fun.
Some of the games I have been enjoying lately (in no particular order) are:

Okay, I’ll stop there. That list is quite scary enough. I have been playing far too many games last month. Most recently I have been getting back into the Halo universe. Previously I felt the Halo franchise was a little too “cartoony” when compared to games like Gears of War and Rainbow Six, but after being lured into buying the Mythic Map Pack it has really pulled me in. So much so, that I have also downloaded the Legendary Map Pack and even purchased a book to read on my holiday next week. Mental!

My Gamerscore
The last time I posted about my gamerscore was back in February (I think.. I only did a quick search) with a total of 32,525 points. My total now is a score of 38,050 achievement points thanks mainly to Halo 3, Left 4 Dead, Call of Duty 4, and Fifa 09. Infact, as it was in February, it was probably due to a lot of other games I have forgotten about.. nevermind.

What’s Next?
So what now? Soon I will be posting about some of my E3 favourites (my most anticipated games), some of my recent favourite games, online co-op fun, and some other bits and bobs. Come back soon to see what’s new. 🙂