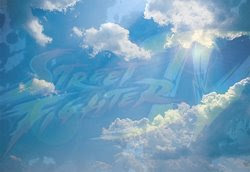 I went home for lunch today and was surprised to find that I had already received my copy of Street Fighter IV (4) for the Xbox 360! Living in the UK, I didn’t think it was available until tomorrow (20th Feb 2009).

With it being a lunch break I only managed to fit in about 20 minutes of play, but wow! What an amazing and exciting 20 minutes that was! In the time I had, I managed to play through the Arcade mode on the easiest setting (Very Easy). I’ve been playing Street Fighter games since the early Mega Drive games, but felt I may be a little rusty. I also picked Ken as my character of choice.

At the beginning of the Arcade Mode I was treated to a little animated short of Ken and his wife (or girlfriend?) both discussing him meeting up with Ryu. I thought this was a really nice little touch. It’s little details like this which add to the overall experience. It wasn’t long after the introduction that I got my first experience in fighting. I found straight away that the controls and character movement were extremely fluid. I’d read quite a lot on the Internet previously about people’s troubles with the Xbox 360 controller, but I found the analogue controls fine and very accessible.

Street Fighter IV plays very much like the classic Street Fighter 2 games. There is enough familiarity to please nostalgic fans, but there is plenty of fresh content to please everyone. For the first time ever (except maybe Street Fighter Alpha 3) it feels Capcom have finally understood what it’s fan base have been craving for.

The overall presentation of the game is very high. The only downside so far is that on standard definition TV’s the text can be hard to read sometimes as it is very small and thin. Everything else is a compliment to your eyes.

Whilst I managed to complete the Arcade Mode using Ken I had to skip the end sequences, which meant I missed out on the final boss ending sequence and animated outro. That said, from the short time I had playing this game I got a great feeling from it. I can’t wait to get back after work and the gym to sink many more hours into this fantastic game (and hopefully write a better review!).