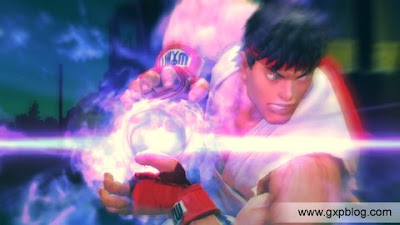 Street Fighter IV (4) is on it’s way! I have just checked out my e-mail inbox and found a confirmation that my pre-order has been packaged and sent in the post. I’m so excited!

IGN
“Street Fighter IV is a fantastic game overall and Capcom should be commended for designing a game that can work on so many levels by appealing to both casual and hardcore players.”

Official Xbox Magazine
“If you’re a novice, a training mode and eight levels of difficulty will help you find your way. If you’re a pro, SFIV contains all the depth you’ve ever loved about the series, without compromise. Capcom simply got the feel of Street Fighter perfectly right.” [Feb 2009, p.76]

GameTrailers
“Fighting games have long been out of the spotlight, and Street Fighter IV basically carries the future of the entire genre. It refuses to make itself accessible, doling out tough love in place of true tutorials or simplified control schemes, but by proving to be deep and fundamentally enjoyable, the series has once again proven itself worthy of attention.”

Planet Xbox 360
“The complexities of the fighting systems are incredible to take in. Hardcore Street Fighter fans will have a field day with developing strategies and putting them into effect. It’s deep enough to satisfy tournament loving players who’d rather win by skill, but it’ll also win over the praise of casual players who love to dabble with fighting games when they have a friend to play against and button-smash without worrying about Ultra Combos and Ex moves.”

GameDaily
“None of the modes – Arcade, Time Attack, Versus – scream innovation, and confusing anime-style cut scenes had us scratching our heads, but the wealth of hidden content, online play and addictive combat make Street Fighter IV one of 2009’s most exciting video games.”