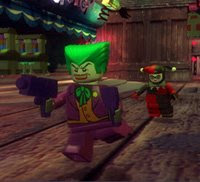 On this level you need to collect 1 million Lego Studs. It appears I’m not the only one who got stuck as many of my friends have also told me how they have spent over 45 minutes trying to get the last few studs.

The place where I found the last remaining Lego Studs on the Wayne Manor level was on the part with the 5 blocks above the orange moving ones. The 4th block would not break, no matter how much I tried. After some mind-numbingly frustrating experimentation I found out you need to jump towards the screen to break it. Glitchy or what?

I used Clayface to double jump, and for invisible bricks I recommend Joker as being the best. His gun fires a lot faster, taking up a lot less time to complete the level.

I hope this helps a few people 🙂